Since the early 2000’s, practitioners and researchers have been working on ways to design market-oriented development interventions with smallholders. Many of the findings have provided positive experiences by a given NGO or project in a particular context. Early writings helped to put value chain development (VCD) on the development agenda, while advancing innovation in market-based project design and implementation. After more than a decade, however, the question of whether VCD has lived up to the expectations of smallholders, the private sector, and development agencies remains open. This debate is an important one, as it gets to the heart of how much farmers, their families and communities gain, even when a project is considered successful. Getting the right mix of services, at the right time, to the right people, taking into account variations in the context in which livelihoods and business activities evolve, remains a formidable challenge to development agencies and the private sector alike.

Eight articles in this double edition of Enterprise Development & Microfinance discuss the opportunity and the need for increasing the effectiveness of VCD support services, with emphasis on: 1) interactions between NGOs, governments, and the private sector; 2) engagement of large-scale buyers and 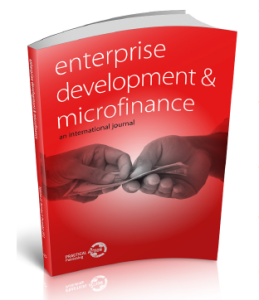 certification bodies with smallholders; 3) the way gender shapes VCD outcomes; and 4) the role of responsible finance and impact bonds.

“The contributions in this edition take a critical look at how businesses, NGOs and governments are engaged in VCD and explores new directions for design and implementation, something that has been lacking in recent discussions on VCD”, says Jason Donovan (World Agroforestry Center), one of the edition’s editors. “It is exciting to see that several researchers